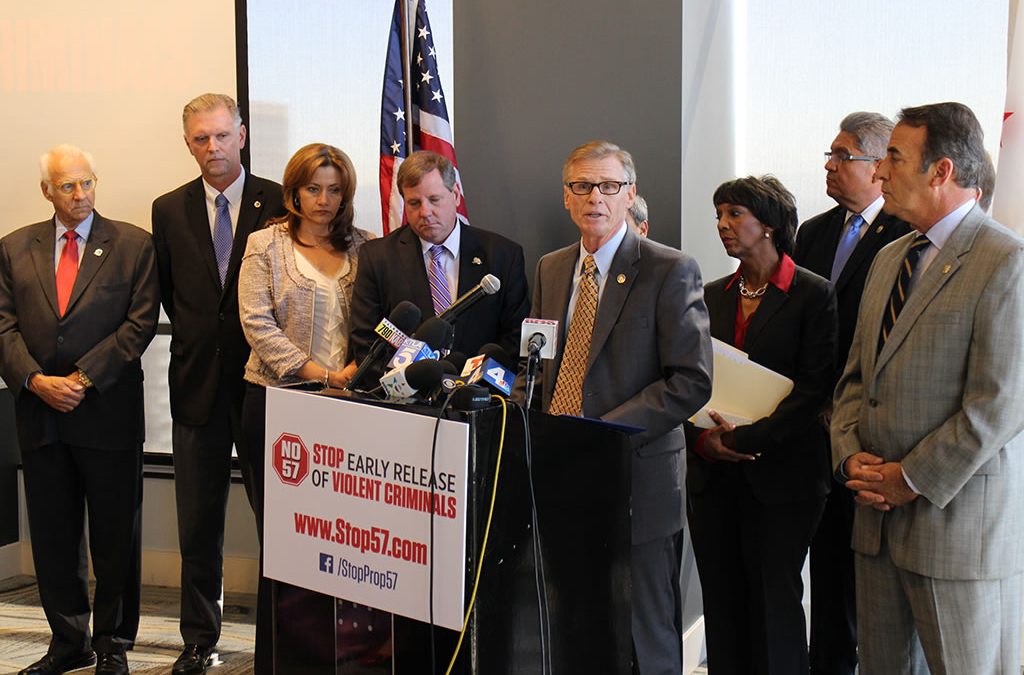 In our role of providing specialized communications for public safety organizations, 911MEDIA has provided the following article representing law enforcement’s concerns about Proposition 57 on the California ballot, to be voted on November 8. Need help with your organization’s communications? Call 877-DIAL-911 (877-342-5911).

Top law enforcement officials, peace officer and district attorneys’ associations, victims’ rights organizations and civic leaders from across the state have joined forces to speak out against Proposition 57,  which will be voted on in California’s general election on November 8. More than 50 county district attorneys, 30 county sheriffs, 20 police chiefs, 30 congressional members and thousands of peace officers, crime victims and criminal justice advocates represented by over 45 associations unequivocally urge voters to vote No on Prop 57.

Innocuously named the California Parole for Non-Violent Criminals and Juvenile Court Trial Requirements Initiative on the ballot and pushed as the Public Safety and Rehabilitation Act by Governor Jerry Brown, who developed it, Prop 57 is designed to ease prison overcrowding by releasing “nonviolent” offenders from state facilities and, ostensibly, to prevent a federal court order forcing their release. But, according to public safety experts, Prop 57 is a flawed, misleadingly titled measure that will allow tens of thousands of violent criminals to be discharged from state jails and allowed back onto the streets.

Further, changes written into Prop 57 would be incorporated into the California Constitution as an amendment, so any detrimental effects could only be changed by another ballot measure put before the voters.

“If this measure passes, at least 16,000 state prisoners, and potentially tens of thousands, will be released back into our communities.” — Marshall McClain, LAAPOA President and PORAC Director

“Peace officers around the state are alarmed by this highly irresponsible and dangerous proposal,” says Marshall McClain, President of the Los Angeles Airport Peace Officers Association and Director with the Peace Officers Research Association of California (the state’s largest public safety organization, representing nearly 70,000 members). “If this measure passes, at least 16,000 state prisoners, and potentially tens of thousands, will be released back into our communities.”

Analysis by the California District Attorneys Association (CDAA) finds that the governor’s initiative would create drastic changes to sentencing laws, provide prison officials with broader authority to award good conduct credit, and conflict with other constitutional and legislative provisions such as use of enhancements — policies enacted over decades by voters and the Legislature to ensure that punishments fit the crime. Under Prop 57, inmates sentenced to nonviolent felony offenses would be eligible for parole consideration after completion of only the term of their primary offense, and because only a limited number of felonies are defined as “violent” in the penal code, an extensive list of violent crimes could potentially qualify as nonviolent offenses eligible for early release. These include dozens of crimes under the categories of violent assault (including assault with a deadly weapon), sexual assault (including rape of an unconscious person and use of date-rape drugs), physical and sexual child abuse, child abduction, human trafficking, acts of terrorism, domestic violence, elder abuse, gang-related violence, assaults on peace officers, assaults on inmates and many more.

“Crime rates are rising in our state right now as a result of reduced drug penalties via Prop 47, passed in 2014, and early releases under AB 109 realignment,” says McClain. “For the first time last year, after historic lows, we saw an overall 10% increase in violent crime, 37% increase in rape and double-digit increases in property crimes in cities across the state. Prop 57 will only accelerate this growing problem.”

“The governor believes these criminals are nonviolent; I disagree. We all disagree.” — Brian Moriguchi, PPOA President

Director Kristi Eckard of the Los Angeles Police Protective League, the bargaining unit for LAPD officers, points out another reason the governor has incentive to push this proposal. “There’s a financial benefit for him to not hold these people in a state facility,” she says. “Keep in mind that the state pays for the state facilities, so if he can free up that money, he can spend it elsewhere on things that the state wants to do, like the high-speed-rail project, while keeping his budget balanced. Meanwhile, he kicks the can down to the local municipalities to have to deal with it. He’s freeing up his money and putting the burden downstream on public safety.”

No on Prop 57 coalition members feel that citizens are being duped about the true impacts of this initiative, which is why the campaign is trying to educate voters. “When people read the ballot and they hear the commercials, they’re not truthful,” says Moriguchi. “It’s dishonesty by the governor and his supporters … He says law enforcement supports it — that’s ridiculous. He’s lying to the voters to get this passed, and I think that’s wrong.”